I have a kitten!

Thursday morning during the mid-morning break, one of my favorite ninth graders poked into the library to tell me there were kittens in the courtyard. I don't think I have ever moved so quickly. I saw the mama cat and two kittens and heard from the assembled crowd that there were five kittens sighted before I went to the principal's office. He kindly told me I could take all of them, but I knew the one I wanted: the orange stripey kitten that had been furthest from the bushes. Within five minutes, I had her (as verified by two biology teachers) in a cardboard box in the library office. 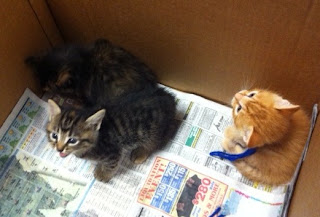 I haven't had a cat in years, because most of them trigger my allergies. Not this one yet, knock wood. Hundreds of dollars of kittens supplies later, I have a pet for the first time in my adult life. It's an absolutely adorable and perfectly well-behaved little thing. We haven't settled on a name, but are considering Tuppence, after Tuppence Beresford in the Agatha Christie books.

Two other rescued kitten spent much of the day in the library. They drew whole classes of students and teachers. If there is a tragedy in all of this, is the ugliness that came out when it came to adopting the other kittens. Everyone wanted them. Fortunately, another student's cat just had nine gray kittens, so I was able to re-direct many inquiries.

Librarian-and-cat jokes aside, it is nice to have something so cuddly and reassuring about. My husband says he doesn't see much dissertating getting done with the kitten on my shoulder, but there have been worse distractions.
Posted by Wendy at 7:21 AM