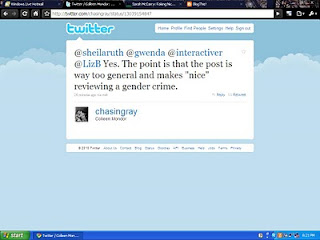 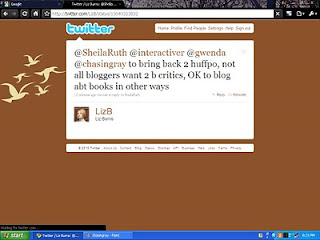 I think writing about reading, like reading itself, is a strange combination of the intensely personal and the sometimes social. McCarry's confusion of interpersonal dynamics and the public aspect of book blogging does ignore those with altogether different motives for sharing. How much of bookblogging is about documenting the experience of reading, preserving it in amber? Remember reading log journals? Well, how much cooler is that when invested with the audience and interactivity of the read/write web? I have just read Jessica Hefland's Scrapbooks: An American History (see associated website), and I keep coming back to bookblogging as a 21st century extension of that unique and personal process of squirrelling away what is important to us.
Posted by Wendy at 9:21 AM 1 comments

I sat in a on a few classes of something called Recommender Systems at Michigan's iSchool, before it became glaringly obvious, with all the talk of algorithms and databases, that predicting whether someone would like something based on the other things that they liked was a bit beyond me. And Recommender Systems cannot take into account the heady effect of being in the same room with the writer. It has almost been enough to convince me to read Lisa Scottoline, but not quite.

Right now, my place is cluttered up with books from writers I heard about at the Alabama Library Association a couple of weeks ago. I heard Susan Gregg Gilmore at the Southern Writer's Lunch. Of course her debut, Looking for Salvation at the Dairy Queen is brilliant and incredibly sweet, Gilmore had Lee Smith as her grade-school teacher. What an advantage! Extra points for Davidson's department store as mecca for rural Southerners.

It was looking at The Improper Life of Bezellia Grove, Gilmore's forthcoming title which wil be featured in Southern Living in Amazonia, that I found Girls in Trucks by Katie Crouch. In a story too familiar to be comfortable, Tiny moves North and is unhappy. Score one for Recommender Systems.

I heard former school teacher Ginger Rue at the Young Adult Services Roud Table/Children's and School Library Division's breakfast, where I won a signed copy of Brand-New Emily a PR-laden mean girls romp. I thought it was cute, but I'm not sure it strikes the right tone. "I would never sell a diamond bracelet," one of my teens said solemnly, when I book-talked it. Emily's issues may be more typical of middle school.

The Alabama Author Awards introduced me to Martin Wilson's What They Always Tell Us, better than but similar to one of my favorites from last year, Vast Fields of Ordinary. Anyone who has ever spent time in Tuscaloosa will appreciate the fidelity of the locale.

Still on order: Ace Atkins' Wicked City. Because I have grappled with cultural issues related to Phenix City myself.
Posted by Wendy at 9:02 AM 1 comments

The Alabama Library Association is in town this week, and on Tuesday, 37 of my colleagues visited my corner of the library world. For the day. They ran the gamut from school to public to academics including --gasp!-- the closest thing I've had to a mentor, the director of my library school... that wasn't exactly what I envisioned when I was asked to host a preconference last spring. I tried to resist, I really did, but somehow was overridden by the wonderfully persuasive Steven Yates, now president-elect of the Alabama Library Association and a stellar high school librarian himself. I also got to serve as a liaison from the convention committee to media specialists everywhere. The work of the committee was absolutely Herculean, so I was gratified to see so many local library media specialists did turn out for the convention.

I hid all the books languishing, waiting for reviews, UNDER MY DESK. Removed anything anywhere in the building I spotted with a misspelling. Had my two best student aides create show-stopping displays. And I recruited Buffy Hamilton, one of the most dynamic and innovatve media specialists anywhere, to come do her thing. I drove 100 miles, in the dark, to pick her up, where she had heroically traveled immediately after two Computers in Libraries talks. Laura Pearle skyped in from New York, and despite technical difficulties with the webcam that left her speaking into a void, she spoke persuasively about the shortcomings of rote adherence to Dewey in meeting the needs of our students. I have trouble asking for milk for my tea, but I begged doorprizes from Linworth (thanks, Paula Jackson!). My favorite part of the day was the teen panel, which really engaged the audience and even sparked some questions from the twittersphere. Thanks, Buffy, for live-tweeting that.

It won't be over 'til I settle the bill with our culinary department, but hosting definitely pulled me out of my comfort zone. I'm not sure my presentation -- rework of Flip Your Collection from YALSA's preconference at ALA Midwinter -- was coherent in the least, given all the stress, but here's a peek:


Then, yesterday, I geeked out and presented on my absolute favorite tool, Twitter, to our state organization, alongside Marianne Lennox (@MLx) trainer extraordinaire from Huntsville-Madison County Public Library and Cheryl Burnette (@WeKnowBooksETC) of Homewood Public. It was a public library division session, so I am extra-grateful they let me share an overview of how Twitter works. Here are those slides:


Today, I get to go back to the Alabama Library Association, but just to spectate and enjoy the company of my fellow librarians. And I slept through the night for the first time in three days!

Now I just have this YALSA preconference for ALA Annual to cobble together....
Posted by Wendy at 6:57 AM 2 comments