I was not going to run for the American Library Association Executive Board. I only have one more year on Council, and while I thoroughly enjoyed my time sitting in on those sessions, I didn't plan on running again.

Then I saw the other candidates -- none school librarians, but all people better suited that than me.

Then I started getting the emails about the election, and campaigning, and the Candidate's Forum, and nomination from the floor, all from the Council listserv.

Then a very fortunate thing happened -- I was appointed by YALSA President-elect Chris Shoemaker to the ALSC/Booklist/YALSA Odyssey Committee.

Not only is this thrilling because it will enable me to listen to a lot of audiobooks and simultaneously feel productive, but because that committee service puts me at the limit of possible ALA commitments.

So I'm no longer on THAT ballot, so I don't have to pen a candidate's statement, or be barraged with the first three questions from the floor at the forum, or compete against colleagues I utterly respect.

This and that, of the bookish variety

I participated in a photoshoot for an E. B. Lewis-illustrated picture book about integration in my hometown a couple of week ago. The book will be called Seeds of Freedom. I might appear in an "integrated downtown street scene." Seeing his storyboards and hearing about how he transforms photographs into his artwork was my favorite part.
I went to UA SLIS Alumni Day, where I tried to convince people to be more active in their professional organizations. Are you an Alabama librarian? Volunteer for ALLA. 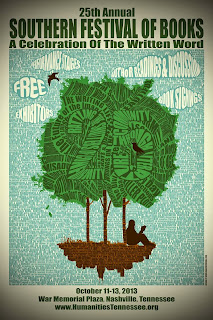 I went to the Southern Festival of Books in Nashville last weekend, and saw an amazing variety of writers, many old friends and writer crushes, but others I'd never caught, including Daniel Woodrell, and Holly Golberg Sloan, whose middle grade novel Counting by 7s has garnered so much award buzz.

The IBBY Regional Conference in St. Louis was perhaps the best professional conference experience I've ever had state-side.... USBBY is an incredible group of kind and thoughtful people, and the turnout from around the world and the very powerful general sessions and intimate breakouts all left me feeling very happy to be a part of this kidlit-loving world. I am saving my pennies for the IBBY Congress in Mexico City next September.

﻿ And getting to rub shoulders with Katherine Paterson? Just amazing.
Posted by Wendy at 5:00 PM 0 comments

A few years ago, I had a rash moment and thought I was going to, single-handedly, save print publications. A world without magazines seemed to me simply unimaginable, so I subscribed to everything Conde Nast had on offer. Now, Next Issue would probably save me some money, but I spend much too much time squinting at an LCD display already...and, frankly, all those mags have been worth it for the excerpt of the forthcoming third Bridget Jones book in this month's Vogue. I have scanned in the excerpt for those who don't subscribe below...I know I first encountered Bridget in a magazine excerpt, but I can't remember if it was Vogue or Cosmo. I do know Fielding changed my (and so many other readers') life with this candid, spot-on exploration of contemporary womanhood. 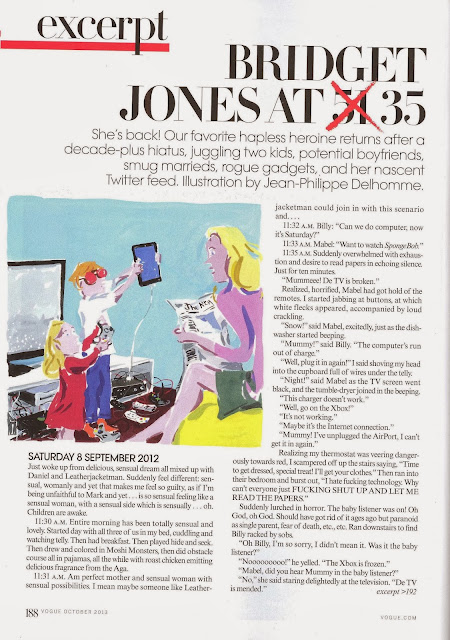 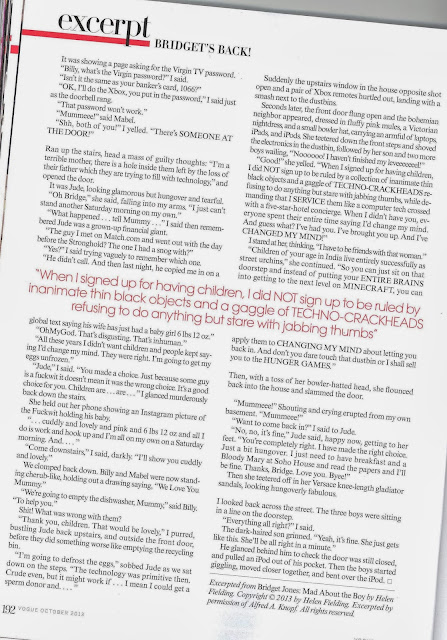 I love the emphasis on the frenetic, wired nature of contemporary life. Again, Fielding gets it just right.  And how terrific is that illustration?
Posted by Wendy at 5:00 PM 1 comments