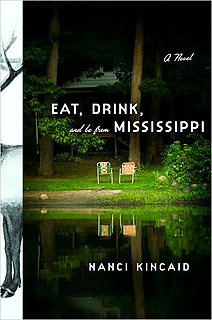 I first heard of Nanci Kincaid when I was at library school in Tuscaloosa. They held some of her papers there, one of my classmates told me, and she used to teach there, having been married to one of the assistant football coaches. I read her novels and stories immediately and loved her work so much that I reviewed her next two novels for our local paper, but Eat, Drink, and Be From Mississippi languished on my wish list for quite a while. When I finally got a copy, I was guilt-riddled for having left it so long.

The book is about siblings who leave Mississippi for California for college, but cannot abandon the folkways of home. There is heady stuff about Silicon Valley entrepreneurship, young men being maimed in Iraq, and gun violence in inner cities. Kincaid now divides her time between California and Hawaii, but it is the Mississippi scenes which sing. The passage where Truely's father watches his son's football practice from the sidelines will feel familiar to almost any Southerner. And there is the most accurate description of the concept of money in many people's lives in this part of the world, a perspective I fear few enjoy today:


"Before meeting Hastings, neither Truely nor Courtney had ever known anything at all about money or the people who had it. Like most Mississippi kids, they had dreamed dreams that had little or no significant financial dimensions to them. They thought of money the same as they did weather -- necessary in some form, unpredictable, volatile enought to wipe you off the map at any given time. Truely and Courttey has little interest in money, peoople with it, or ways to get it."

The later parts, the ones with Arnold, have some uncomfortable elements. Kincaid reminds me of Ellen Douglass in her ability to get at the complex relationships between people, particularly when clouded by race or issues of servility and civility. Truely and Courtney take in Arnold and look after him,but it's more a commentary about their empty California lives than his neediness, and it's nothing near as neat and self-congratulatory as The Help. I am still gaping at the number of otherwise reasonable adults who don't see anything wrong with that book.

I do take issue with the publisher's promotional materials, jacket copy, and the Publishers Weekly review. Arnold is NOT from Mississippi. He is from San Diego, and only knows of Yazoo City second-hand from his grandmother. Kincaid suggests a shared culture, but does not pursue it. This is California she is writing about, after all.
Posted by Wendy at 7:10 AM 0 comments

A bad case of the half-empties

Read the comments following any news article and it's enough to get depressed, and somehow I looked away for a minute, and we wound up bombing another country.

On the hyper-local level, since our economics teacher left, no one can imagine how to create a senior slide show, so it's left to me, or my two library aides, now the unwitting class historians. The slideshow has necessarily has a pictureof all three hundred graduates...


Yesterday, before the student body, I felt as if I (and not the teacher team) was routed by a student (note the singular) from our scholar's bowl team. Our teacher team competes in a local "bar-style" trivia tournament this Tuesday...
And that was before the tremendous attenuation in our poetry slam, where thirteen poets signed up, six submitted their poems, but only three turned up to read last night.
We used to have much better-attended events, but I fear those are victim to teens' over-scheduling, building around the spring sports, the band trip, with students in Serbia.
But why am I focusing on the negative? Those poems ran the gamut from sad to mad to romantic. There were tears and giggles, and it didn't drag on forever. 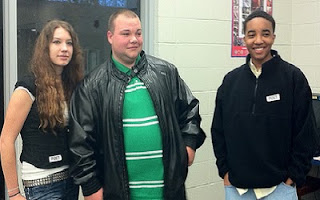 And I somehow can't believe it was just last Friday that I met a group of students to see Little Women (the first production of the musical in Alabama). In an unanticipated bonus, the female lead, a show-stealing Jo March, was a high school student from another school in our system.
Then, there was a too-quick trip to Washington to present at Computers in Libraries' Internet at Schools track, which pulled many people outside the purview of schools. I got to talk with people about re-thinking collections and ebooks, saw friends, and met some new people, many whose names I knew, and hopefully didn't embarrass myself too badly, but I do tend to mention that stretch in the airport on the way back instead of the cherry blossoms, or the Gauguin exhibit.

And, in a rare flash of rationality, a federal judge has held that banning payroll deductions for the state teacher's association is equivalent to viewpoint discrimination, and now the firefighters have agreed.

When I think about everything that has happened recently, it's no wonder I feel on the brink of exhaustion. We've two more weeks until out spring vacation, but tomorrow night, I will put on a suitably dark and severe dress and chaperone the prom, which is at the art museum this year instead of a hotel, which should preclude some of the anxieties which punctuated the event for me last year at the Westin. Seeing them all dressed up and shining is so heartening, but I will never attend another prom without thinking about how Ally Condie used school dances as inspiration for Matched.

So, I will wait until next week to try to figure out ways to limp through another year without any money to buy materials or replace our groaning computers, figure our how to martial my resources to get to the next thing, whatever that may be.
Posted by Wendy at 7:24 AM 0 comments

If you're an ISTE member, you might have seen the March/April issue of Leading and Learning with Technology, where the incredible Lisa Perez showcased some cutting edge librarians -- Joyce Valenza, Keisa Williams, Chad Lehman... and me. Such august company!


Then my co-librarian Carolyn Jo Starkey cataloged every nook and cranny of our facility for a new feature for the Alabama School Librarian's Spring Issue. It's sort of like having strangers come over and peek in your closets, but I am all for transparency (click through to see the document reader below if it's not visible via rss).

In other news, the ALA elections opened today. I'm on the ballot for Council. I was thrilled to find I made Sarah Houghton-Jan's recommendations. I plan on penning a post with my own picks soon, but in the mean time am rather in awe of Bobbi Newman's ability to harness social media for her own Council bid. That gets my vote!
Posted by Wendy at 6:41 PM 0 comments

I can't be the only educator thinking about it. All the teacher-bashing in the media has me considering leaving K-12 altogether...


I visited Siberia through a U.S. Department of State program in 2006. The day I arrived at my host school, I realized how entirely differently the teaching profession was perceived in that culture. Americans have none of the respect which punctuated every interaction with educators in the Russian schools. Teachers are honored, wield an enormous amount of influence, and are even offered inducements. Those teachers get a lot more than apples, let me tell you.  I had a very bright professor once who constantly kept coming back to the anti-intellectual aspect of American life. Maybe it's a consequence of that, that the oppressed populace is rife for revolt against some of the only working-class Americans left with any sort of employee benefits.

What scares me the most? I can't escape this anxiety on the news or online, but I hear precious little about it in my building. Only one of my assistant principals seems aware of all of this. She is one of the only professional educators in our school. A proud and active members of her professional organizations, she attends workshops voluntarily and at her own expense and reads journals, listservs, and both trade and practitioner-oriented books.

Many of the rest on our faculty are craftsmen. Some are very fine teachers, but on the whole, they don't want to devote too much time to their occupation. They watch American Idol instead of school board meetings in the evenings. I still don't think they work part-time or are overpaid, as some of the critics assert, but the conversations about union bashing masked as school reform masked as budgetary crises somehow haven't reached them, and I'm jealous.

Oh, odds are I'll be back at school next year, and for the foreseeable future after that. But this is the time of the year when many things seem possible. My administrators are getting older and will retire soon. My knee-jerk reaction is that I don't want to work for anyone else. I've been told by the state of Alabama I lack the requisite credentials to be certified as a school administrator, which minimizes my professional opportunities.

That jump is looking more attractive by the moment...
Posted by Wendy at 6:15 PM 7 comments

Things really ramped up beginning with the Huntsville-Madison County Public Library system staff day on February 21. I was really delighted to share the work of the most progressive school librarians with our public librarian colleagues. There were lots of really interesting comments and questions after each of the two sessions, too.

I have been getting ready for two Internet @ Schools East presentations in just a couple of weeks. One, with Angela Carstensen, Frances Harris, and Laura Pearle, highlights building digital collections. The second, with Carolyn Starkey, talks about ebooks in schools. I have heard good things about the conference and am looking forward to it.

April, we will have our state library association convention. It's at the beach. I'll be talking some more about ebooks.

So, it's obvious I've been playing a lot with ebooks and ereaders. I have been using the Pandigital Novel to read Adobe Editions from both Netgalley and the public library via Overdrive. I had to take the iPad to the Apple store for a restore, trying hard not to want the new one. I haven't turned on the Kindle in a couple of weeks, but I did download the Send to Kindle extension for Chrome today, so I should have that, some subscription pieces, and a dozen samples waiting for me...I discovered the whole @free.kindle.com, which, along with pagination, is ghettoizing readers based on Kindle version. I did wish I had that extension to publish the piece of student work using that extension I read yesterday instead of transfering it via USB, a la Kristin Fontichiaro's piece. He would have been tickled.

I have been watching the #hcod kerfluffle with something approaching schadenfreude. I went through my access-versus-ownership crisis with digital music, and the movie and television shows I thought I bought from iTunes in 2006. I can testify that many books in my library circulate 26 times in a semester. This is a dangerous precedent, so I am glad librarians are not acquiescing without a fight.

I've also been working on my dissertation. Keep your fingers crossed for me -- I have the tiniest bit of momentum up now and am trying to propel myself towards the end. Shocking spoiler: students with low family socioeconomic status tend to use the library twice as much.
Posted by Wendy at 6:39 PM 1 comments