In addition to all the school week insanity, I am attempting to getting myself together to dart just up the road for the Tennessee Association of School Librarians conference Thursday and Friday. I will doing a technology tools preconference, then speaking about Google searching and ebooks. I'm also going to their awards banquet. Did I mention Claire Vanderpool willbe there?

For some illogical reason, I worry out of all proportion when I am presenting more locally.... 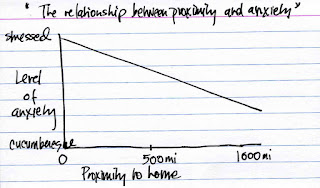 Were I Jessica Hagy, it could be illustrated thusly (with the line never reaching the limit, as speaking nerves will never be eradicated altogether).

In the meantime, I keep humming The Secret Sisters' "Tennessee Me."


Hope to see some of you in the Volunteer State!
Posted by Wendy at 1:45 PM 0 comments

The game-changer of the week is Amazon entering the education fray with its Whispernet Kindle management system for schools (and other organizations) -- while details surrounding the plan aren't too specific yet, I worry that this is very bad news indeed for many school libraries.

Speaking of those digital files, I spoke with journalist Liz Logan about ereading for an article for Ampily, NewsCorps' new education site about my ereader program at my other school, though that's not too explicitly stated. What a thrill to be quoted in an article with Jessamyn West!

In other news, I've been saying this FOR YEARS: AP classes are a scam.
Posted by Wendy at 7:45 AM 0 comments

It's the American Library Association's Banned Books Week. Intellectual freedom is one of my most heartfelt beliefs, something on which I have written and presented. And I was thrilled when my incredible instructional assistant suggested putting together a display for the event. She wrapped titles in brown paper and put incendiary objections on the front: "I am Satanic" for Harry Potter, "I am racist" for To Kill a Mockingbird (which the freshmen are reading, perfectly enough), "I am communist" for Animal Farm. It has been quite the topic of conversation as they rifle the shelf. My principal said it was "a principal's nightmare," just before suggesting we add The Bible. I was thrilled when SLJ featured Cassie's handiwork on its Facebook page. 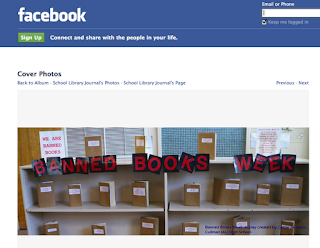 The most perfect reaction, however, came from a ninth grader. Were we getting rid of those books? No, I told her, it was to raise awareness. Some people will complain about anything. She said she had something she wanted to request then. Fifty Shades of Gray. We won't be getting that one, I told her. Well, she said, I have another one. Diary of a Wimpy Kid. I told her I would order that one. From Fifty Shades to Wimpy Kid in one fell swoop. Teenagers can be very funny.

I'm in Georgia for COMO's Youth Services preconference today, so I didn't put anything together for Banned Website Awareness, but over-filtering is less of an issue in my new district. The kids can get to email, twitter, facebook, but strangely, none of us can look at GoodReads. I still haven't figured that one out.

In other news, I was on Steve Thomas's Circulating Ideas podcast, which was a little thrill as I'm a fan.
Posted by Wendy at 5:48 PM 0 comments