Believe it or not, it has been just more than ten years since I graduated from library school at Tuscaloosa. I had several different careers before then, in production at a local television station, freelancing features for the newspaper, teaching community college English and three-year-olds at preschool, among other things. 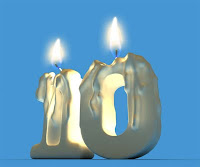 I went to work at Sirsi ten years ago this month, and it was a wonderful education in networking and computing in general. It was really fascinating to see all the different types of library settings and hear about their practice, but I did want my own library laboratory.  I've been at Buckhorn for eight and a half years now, and it has been wonderful.

I was asked to present the keynote for the Alabama School Library Association annual conference on Monday, and a session on technology in the library that afternoon. I was really overwhelmed by the kindness of the board and the members, their engagement, and their interest in the topic, which was Future-Proofing Your Library.

I received the new Ann Marie Pipkin Technology award from that organization, our AASL affiliate. It is an honor named for one of Alabama's most influential school librarians. It was all the more wonderful because my assistant principal, Sarah Fanning, won the ASLA Distinguished Administrator award this year as well. She has been a tremendous professional inspiration and personal support. We owe Carolyn Starkey tremendously for her nominations!

I spoke four different times at the Alabama State Department of Education Technology Initiatives Library Media Symposium Tuesday -- first for the general session, twice on what I'm calling the Google reading suite (reader, news, scholar, and books) and once on Google searching (which was a pinch-hit).  Exhausting but such fun and important topics! I loved the circularity in talking about digital equity more than ten years after I wrote my first survey paper on the topic (and, as a huge bonus, my professor from that course was there to hear it!) The Symposium is part of the Alabama Educational Technology Conference, which is always terrific. I'll be back there presenting again Thursday...

The Library Symposium was really exciting. Everyone was buzzing about Eli Pariser's The Filter Bubble and RSS. So almost ten years after XML changed my life, I am finally selling it... Also, Cyndy Dunning and Charlotte Owen, two of the elementary librarians from my district, were in Birmingham for both the events. It made for a really powerful learning experience for all of us, because we were able to confer after the sessions and throw ideas about.

It was also terrific to hear and see the work of my PLN in every corner of the Symposium -- watching a recorded Skype interview with Shannon Miller about web 2.0 tools, a clip with Buffy Hamilton interviewing students about Evernote, or seeing Comic Life posters inspired by Gwyneth Jones' creative signage. These amazing women are changing the culture of school librarianship everywhere!

Anyway, I will continue the decadery celebration at ALA Annual -- again, my first ALA Annual was San Francisco in 2001! -- where I will attend AASL All-Committee, the Web Presence Advisory Committee meeting, and the Council orientation and Youth Caucus.

I am also presenting a few times:


I hope to post more about the specifics of the programs, but, in the mean time, the latest incarnation of the ALA Conference Scheduler is really fab.
I feel really fortunate to have found my way to such an invigorating and vital profession.
Posted by Wendy at 3:53 AM 0 comments

In the land of dreamy dreams, New Orleans

I haven't even begun to get my schedule together for ALA Annual in New Orleans later this month, but I can't wait to visit one of my favorite cities with my people.

If you're headed to New Orleans for the first time, I hope you have lots of time to wander around. Don't miss the Odgen Museum of Southern Art. It's a Smithsonian affiliate, a great space with excellently curated exhibits. I saw their last Birney Imes photography exhibit, and it was incredible and how perfectly appropriate for a visit to the Deep South! And if I had never been to New Orleans, I would definitely take the streetcar, probably into the Garden District. A few more suggestions....

Everyone likes Cafe du Monde, but I really like CC's Community Coffee House on Royal Street. Royal Street is what you think of, all the wrought iron, crumbling plaster, and street signs in French. Someone asked about music. There's music everywhere. Try Frenchman Street any evening. The Avenue Pub over there is fun, too.  If worse comes to worse, there's always Preservation Hall.

I'm a teetotaler, but when in New Orleans I will have a Pimm's cup at Napoleon House, which was closed during the last ALA Annual in 2006, and a hurricane at Pat O'Brien's, where you have to sit in the courtyard. Whatever you do in New Orleans, it should involve ample sitting in courtyards. And, when I was there in February, there was a new Pinkberry near the conference center, but no courtyard.

New Orleans is NOT vegetarian-friendly. When I was there last, I was served a grilled cheese sandwich filled with bacon. So don't say I didn't warn you... If I were going to splurge on one meal, I'd eat at Bayona. You'll get all the Susan Spicer references in Treme. It's an incredible menu that melds all kinds of influences. I also really like the strawberry milkshakes at Stanley!  on Jackson Square, a stone's throw from the cathedral and all the street artists and performers. Also try Stella! and the Cafe Beignet, with its courtyard next door to the police station, where there are usually some cats.

For shopping, you will definitely want to hit the French Market for the best tat. There's Hemline, and some great stores in the Shops at Canal Place and at the Riverwalk, especially the store which sells repro folk art. Also, some of the stuff from Marie Lauveau's House of Voodoo is worth a look. Also, find Faulkner House Books in Pirate's Alley.
Posted by Wendy at 8:29 PM 0 comments