One of the first ARCs I dove into after ALA Annual was Francesca Segal's The Innocents, a translation of Edith Wharton's The Age of Innocence to the contemporary London Jewish milieu, More Anita Brookner than What Happened to Anna K.?, it was a lovely way to revisit some familiar characters and conflicts and feel that some behaviors are indeed universal across time and place. To be really successful, the writer and reader both have to be intimate with the source text.

It got me thinking about some other recent reads, like An Unexpected Guest by Anne Korkeakivi, which was a loving update of Mrs. Dalloway, complete with the heart-string tugging shell-shocked soldier, a symbol of generational waste.

And now I have order New Girl, a YA update of Rebecca. While I loved Brian James' The Heights and the homage to The Bell Jar in And Then Things Fall Apart by Ariana Tibensky, some reimagings detract. This week, Crys Hodgens reviews Falling for Hamlet, which I couldn't get into, but, frankly, is anything as ripe for an alternate point-of-view as Salinger?
Posted by Wendy at 6:41 PM 0 comments

While I was finishing packing to go to New York at the beginning of June, I got an email from a colleague with whom I'd been corresponding about the upcoming construction project at her school. She had decided to retire, and was I interested?

By the time I'd landed, I'd gotten emails from the principal and assistant principal. I'd be back on Tuesday, so perhaps a talk Wednesday? I printed out a list of interview questions I'd put together for a former assistant principal of mine who needed to hire a librarian.

I really intended to find someone good them initially. As when my colleague Carolyn Starkey left the school recently, I tried to get in touch with the better candidates I knew, but they either had positions or didn't want to make a change. 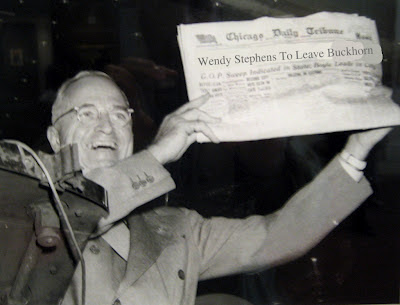 Meanwhile, the other district grew irresistible. I was particularly impressed with the principal and the vision he had for the library as a center of the entire community. It was obvious they were seeking someone exceptional who could really bring some fresh ideas to the project and the library. The district was a small, well-funded one with really progressive technology, I knew the instructional technology specialist through the Alabama Best Practices Center 21st Century Fellows. I'd had my eye on them for a while because the superintendent was my homeroom teacher in high school before she became principal at our neighborhood school. She had graciously written me a letter of recommendation when I applied to Buckhorn a decade before.

I began to realize much of the frustration I experienced in my job at Buckhorn was the result of the nature of the district. There are enormous schools and tiny ones, one school for one grade or eleven grades in one building, schools with resources (often federal) and those without. They are all the same under district policies. I often talk about how school libraries offer more autonomy than public libraries. I am learning that is doubly true in small districts.

After many weeks of conversations with the school and district administration there, I decided to take the job. I think the clincher were Madison County's response to the news of a 1:1 initiative and digital textbook program in the local schools. While I really don't think throwing $22 million at Pearson is the answer, I do feel as if I have to keep teaching with technology to keep up in the 21st century, and that was getting more and more difficult in year four without state funding.

I am interested in the experience from an academic point of view as well. After the demolition this winter, I won't have a real facility for eighteen months. How do I develop a program given those constraints? Will I be able to replicate my success in the different, more academically-oriented environment? What about working reference and readers' advisory without all my materials? And what about walking away from all the thousands of books I'd reviewed or bought myself? Also, as it isn't a strictly lateral move, I'll be getting a supplement to coordinate the librarians, which is something new there and new for me. How do I do that? And, perhaps most pressingly, would the other librarians resent me, the interloper?

Everyone I've met in the new district, librarians included, has been incredibly kind and welcoming, and even the school board policy manual is a refreshing work of common sense. I am worried about learning names and faces, and about the almost-an-hour drive there each way, and about my resulting carbon footprint. I keep thinking about books on tape, but know it will more likely be the righteous indignation and hypertension resulting from NPR. I feel guilty about leaving a more racially and economically diverse school for a more homogenous one. I worry that a district like this, where a good number of students are paying tuition, is too close to the sort of educational colonialism undermining public schools. I worry about community norms and intellectual freedom. But I was feeling the anxiety of a larger school with more subgroups, more transfer students, increased anonymity and animosity in both students and teachers. I am hoping this switch will be a balm to that and will enable me to focus on being a librarian.

(And, fingers crossed, this will be a great setting for my dissertation research.)
Posted by Wendy at 6:25 PM 1 comments

I spent much of last week at a curriculum alignment summit, mapping Language Arts resources in our state's lesson plan database to Alabama's College and Career-Ready Standards (built on top of the Common Core), when I read Melissa Jacobs Israel's piece in School Library Journal. It is an excellent discussion of what it is behind this much-ballyhooed change in English Language Arts standards and what we must hope to construct with what we have been given.

Because of the publisher's rhetoric about the increased demand for nonfiction, I too had previously thought of the Common Core in terms of the text exemplars. After all, I didn't want to be caught out without the appropriate resources to support instruction in my building. But as I spent time looking at the standards last week, it quickly became apparent that the objectives could be met using existing texts and even lessons. I think most of the Common Core involves teachers structuring assignments and asking probing questions to get students to stretch and to articulate their thinking. And by the end of the summit, pretty much every text was looking informational -- the suggested proficiencies for informational text overlapping nicely with those for literature. And anyone who ever read Amy Pattee's article "The Secret Source" will know that one reader's literature is another's informational text.

I do think there are things for school librarians to get excited about with the adoption of the Common Core. But it's not the new resources. It's opportunities for collaboration on the suggested range of research projects, small and large, a mandate to evaluate resources, use appropriate citation styles, integrate a range of types of text, and present work through multimedia and authentically produced products.

And, in other thoughts on the Common Core, I agree with Teri Lesene about "close reading really not being the same as re-engaging with the text." After all, it's a marked luxury when we, the people of the book, are given the opportunity to really practice deep reading.