Here's to another year of... 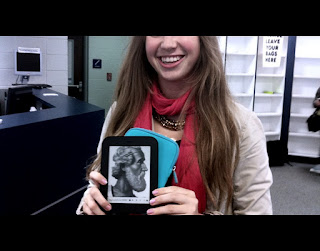 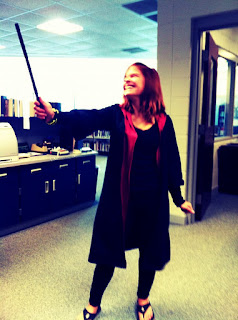 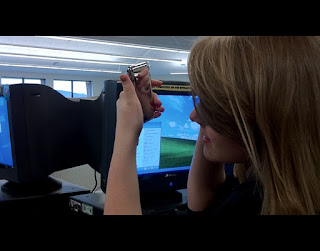 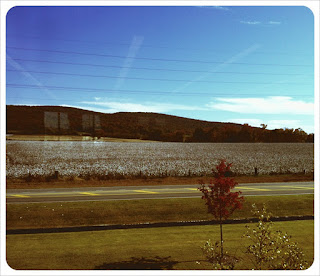 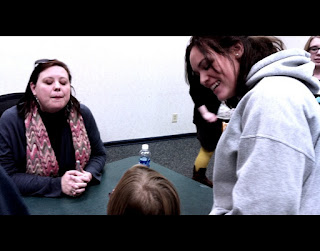 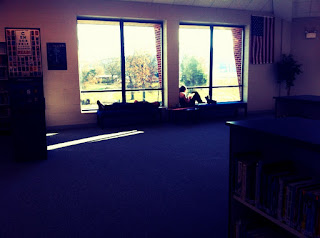 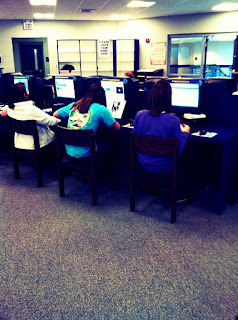 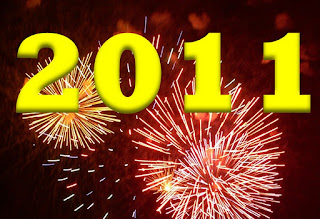 January: The year kicked off with ALA Midwinter in San Diego, which included a fabulous walk on the beach on Coronado Island. I back flew into unprecedented winter weather -- four consecutive snow days! The month wrapped with Educon, which was absolutely mind-blowing, especially the student life panel. I want our students to feel as "at home" as those at SLA.

February: I sent in my petition to run for ALA Council. We went to New Orleans for a long weekend for my husband's birthday, where we saw an incredible Birney Imes exhibit. More snow days. I spoke to the Huntsville Public Library employees on their annual staff day about today's school libraries.

March: I presented with a stellar ebook panel at Internet @ Schools East, making some predictions about the impending Kindle crackdown, print as luxury objects, and the need for better enrichment in digital products. Also saw incredible Gaughin exhibit at the National Gallery.

April: Awesome students rocked the regional technology fair. Spring break getaway to London and Colwyn Bay in Wales, then off to the Redneck Riviera for the Alabama Library Association.  The month came to an abrupt end with the spate of tornadoes which eliminated electricity to north Alabama for almost an entire week (and prevented our participation in the state technology fair).


May: Was elected to ALA Council! Book club stalwart performs as very wicked stepsister in local children's theater production of Cinderella. We are all still recovering from the natural disasters, and the state allows us to end school as scheduled instead of making up those days.

June: Providing PD, and more PD. I gave the Alabama School Library Association keynote, spoke in a series of technology-related state conferences before ALA New Orleans, which might be the best ALA ever. I again presented on ebook topics, won a crown at Pecha Kucha, convened a stellar distance panel for YALSA, and just generally enjoyed all the fascinating conversation about cross-platform publishing opportunities. Start getting some really positive feedback re my dissertation, which is especially exciting.

July: Reprised some of the f2f ALA stuff for a Virtual ALA, presented a YALSA webinar on ebooks, and facilitated some local educational technology PD. I re-started my educational leadership coursework, after some state-level hiccups. We also went to Hemingway Days in Key West.

August: School starts back later than usual, after a full week of teacher work days. Did my comps for educational leadership M. Sci., and began the first of two internships at a K-6 campus. Kicked off our Nook pilot project at school.

September: Did the second internship at a K-8 school. Saw traveling performance of Cirque du Soleil with students. Headed to suburban Virginia to speak at the SLJ Summit, saw the incomparable Toni Morrison at the National Book festival.


October: September ended and this month kicked off with the Kentucky School Media Association keynote. Terrific hospitality, and I am now an Honorary Kentucky Colonel. Spoke at the LJ/SLJ Virtual ebook summit, and to a group of local types at BEST. Spent an amazingly relaxing week lolling on the beach on Maui, before heading up to Minneapolis for AASL. The full-day preconference went amazingly smoothly, as did the leadership panel, and my snarky little Uncommons video is still making the rounds in the biblioblogosphere. Yes, I believe you should read a book a day.


November:  Saw the Secret Sisters, one of my new favorite groups, at the Princess Theater. Took students to see authors Myra McEntire and Rachel Hawkins at a local branch library. Went to Chicago for ALAN and finally got to Oak Park to see all the Wright houses.

December: Our principal retired (sob!), so we sent him off in grand style. Went to the Blue Ribbon Schools conference to present our school's "best practices" with regard to materials to support adolescent literacy and technology integration, saw more Cirque du Soleil and enough Disney to last me forever.

I was reading the gem that is Peter Akroyd's London Under when I started wondering about the ebook incarnation. And it was surprisingly terrific. 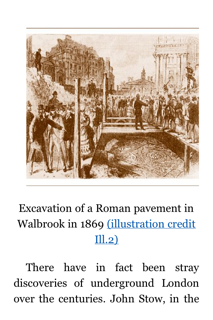 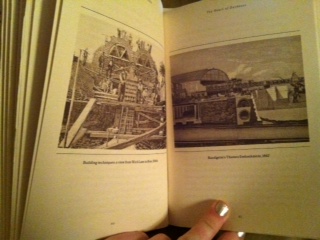 The e illustrations are ALMOST legible on my iOS devices.  Wondering about the Fire display of images... 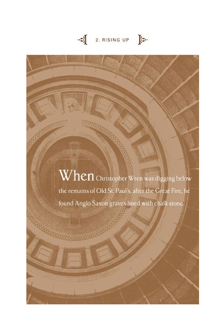 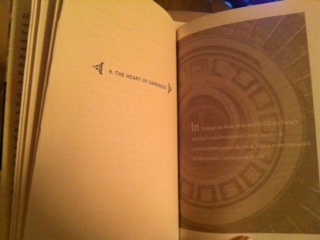 I do wish the chapter heading was set off on its own, but it's not the worst.

Very elegant little translation into a ebook, in my opinion. We weren't seeing products like this last year, that's for sure. We live in interesting times!
Posted by Wendy at 8:19 AM 0 comments

Another year, another couple of hundred books. These were the best of my year.

Some of the better voices I encountered this year, in short pieces as well as novels, intended for grown-ups.

You Know When the Men Are Gone (2011) by Siobhan Fallon
I found this collection of realistic contemporary stories set at Fort Hood through my library’s ebook interface, and I was immediately transported into the lives of Army wives. The scene where the wives watch their husband shipping out, and count the dangerous number of women among them, is still chilling even upon many recollections.

Salvage the Bones (2011) by Jesmyn West
I read some buzz about this one coming out of a preview and preordered this as well as West’s first novel, Where the Line Bleeds. She captures the American gulf coast in all its strangeness, and the Hurricane Katrina setting which is the linchpin to the plot point is dizzingly evocative. But I was surprised as anyone when it took the National Book Award, frankly.

Rules of Civility (2011) by Amor Towles
Another book I couldn’t wait to get my hands on. Set in the very late 1930s, among a milieu shifting from boarding houses to the upper crust, it’s giddy and surprisingly resonant for contemporary American historical fiction.

You know I love my British authors, and feel I should be able to buy anything, in this digital age. The good news is that many more U.S. editions DO seem to be appearing…

Comfort and Joy (2010) by India Knight
A Christmas story which revisits the characters from My Life on a Plate and exposes all of our worst anxieties about the Christmas season. Well worth the international postage (though it was more of a New Year’s read for me…)

The London Train (2011) by Tessa Hadley
Intersecting stories from London and Cardiff explore the lonlieness and disconnection of modern life. I said it before, I think Hadley is almost up to the caliber of Margaret Drabble with the left-leaning social realism.

Homecoming (2011) by Cathy Kelly
This book, about a famous actress who resorts to coming back to Dublin after acting as “the other woman” in another actor’s long-standing marriage, is so terrifically warm and fuzzy, I knew Kelly was channeling Maeve Binchy. I enjoy her long and absorbing novels, but this one, set in appealing Georgian square peopled by warm eccentrics, was a particular treat.

Sometimes, it seems like the world can’t get any worse. And then you read a dystopian novel…

Awaken (2011) by Katie Kacvinsky
A world where there are no schools and all interaction is done via computers seems like a frighteningly possible, if not inevitable, outcome of the shift to online learning.

Bumped (2011) by Megan McCafferty
When a virus renders adults infertile, the pressure to conceive makes demi-celebrities of fecund teens who “preg” for profit. McCafferty should win some sort of prize for the inventive slang alone.

Sometimes, the dystopian is a bit dark…

Small Town Sinners (2011) by Melissa Walker
A realistic story about a small town girl realizing that things aren’t quite as black and white as her preacher father’s fundamentalist doctrines would have her believe. The fascinating backdrop of church theatrics makes this one a go-to title for teens looking for relatable characters grappling with burgeoning issues of identity.

Ten Things We Did (and Probably Shouldn’t Have) (2011) by Sarah Mlynowski
A hysterical book for older teens about misadventures of two best friends when they are left “home alone” for their senior year.

A Shore Thing (2011) by Nicole Polizzi / Valerie Frankel
Don’t hate on Snooki – she was smart enough to snag the brilliant Frankel as her ghostwriter, so the book is actually rather adorable. We’ll call it realistic, even it is about a rather limited milieu.

I have to give it to Marcus Sedgewick, the guy can cross genres handily, and it's all awesome.

Revolver (2010) by Marcus Sedgewick
A breakneck historical drama set in an Alaskan mining camp that will keep any reader on the edge of their seat, with not one but two clever twists. I will be recommending this to boys FOREVER.

White Crow (2011) by Marcus Sedgewick
An amazingly menacing story about an English town tumbling into the sea, two girls who might be friends or enemies, and a legacy of evil surrounding a very dark place. Incredibly atmospheric.

A couple of splendid books from some heavy hitters.

Decoded (2010) by Jay-Z
It’s not biography as much as exploded liner notes. If you can’t get enough, there’s a standalone book app in addition to the really nice enhanced ebook version. And Sean Carter, forever the entrepreneur, has added three tracks to the “paperback release.” You’ll be humming, it’s inevitable.

Playground (2011) by 50 Cent, Laura Moser, Lizzi Akana
Curtis Jackson writes about contemporary middle schoolers with some real understanding of what it is to be bullied, and to bully in turn. The language is strong, but otherwise quite diverting.

On the digital realm

How to Leave Twitter (2011) by Grace Dent
I agree one hundred percent: without twitter, life is like slogging through molasses. Dent captures perfectly all there is to love and hate about the microblogging platform in her typically hysterical, but deadpan, way.

The Filter Bubble (2011) by Eli Pariser
Explores how customized display filters are actually creating very local and personal version of online experiences, as well as the ramifications for media consumption where we have become accustomed to our own niche.

I re-read a lot of Agatha Christie, plenty of recent YA, and all of JoJo Moyes. Here's to another year with lots of time with books.
Posted by Wendy at 6:06 AM 0 comments