Some YA I've Loved, and Dallas Buyers Club

I read We Were Liars not once, but twice, last weekend. It's every bit as fabulous as you've heard.

Maybe it's this interminable winter, but I am all into the New England thing all over right now. Being Henry David was a lovely amnesiac mystery cloaked all in Thoreau. I, for one, was rooting for reincarnation...

I read Boy Nobody over the holidays, and was thrilled to find the adrenaline-packed antics in the sequel, The Lost Mission, continued just moments after the first book closes. It takes place in a right-wing youth training compound in the New Hampshire mountains, and is non-stop fun.

Winger by Andrew Smith. Everyone else is onto Grasshopper Jungle, but I'm just behind. Bawdy like the only the youngest boy in the class can be, but this one blew me away. Such tender characterization, I even sold one of my Susanne Colasanti-loving regulars on it. 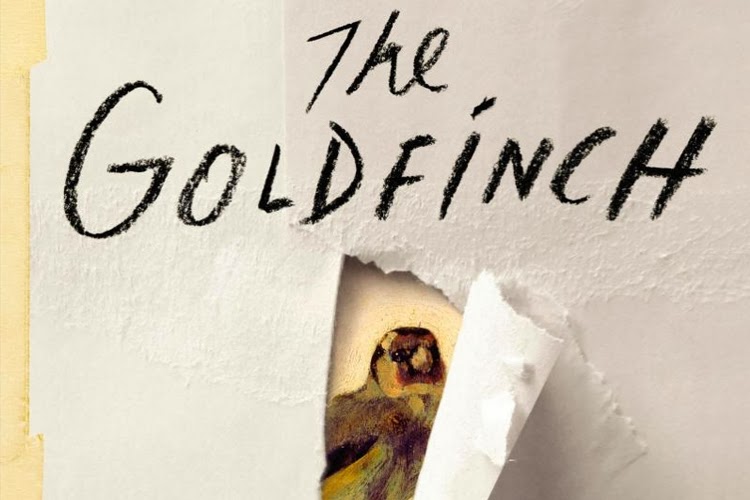 It's not YA, but it sort of is: I'm finished listening to The Goldfinch this morning, with that final meditation playing on the bridge over the Tennessee River as the sun was rising. The audio was 32 hours long, but every minute of it was terrific.  So much so, I'm a little sad to think about life with Theo and Hobie and Boris...

But I finally saw Dallas Buyers Club last weekend, and I was thrilled with one scene in particular. When Woodruff, the Matthew McConaughey character, gets such a grim prognosis, where does he go? TO THE LIBRARY. And armed with that information, including the toxicity of the current clinical doses of AZT, he starts taking control of his own healthcare. I hope it wins all the awards just because of that. Libraries save people, and they help them save themselves.
Posted by Wendy at 5:00 PM 0 comments

Over the past year, I've had the terrific privilege of working with the United States Board on Books for Young People (USBBY) (more) as the ALA/AASL representative to the Board of Directors. Now, I'm scheming ways to stay involved with the group after my term ends this fall...

Along with Jamie Naidoo at the University of Alabama, I'm one of two State Ambassadors for Alabama for the organization. Your state might have one as well. But that means we have access to all sorts of great information and opportunities associated with international children's literature, multicultural issues, and global understanding, all delivered in a convenient monthly newsletter...and you certainly don't have to be within Alabama to receive it... 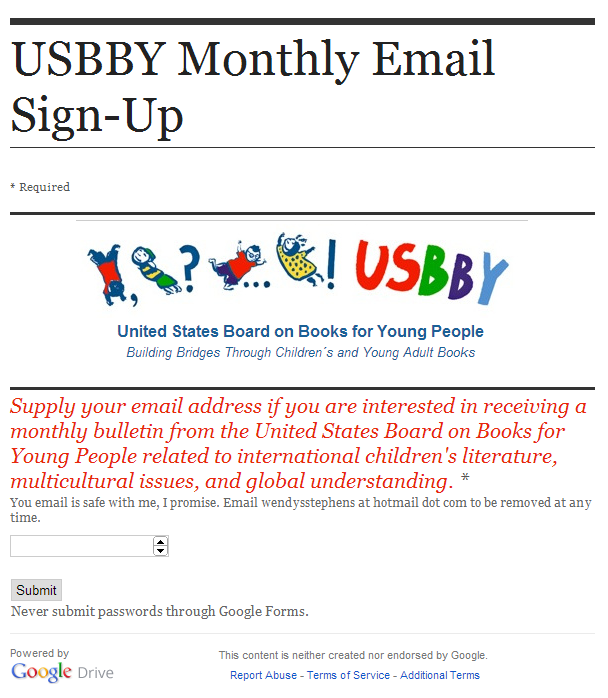 I've also included the text of this month's email from Constance Vidor below for a sample, and these are the links referenced:
The OIB list
Batchelder reflections
All the ALA awards
Very exciting events happened at the ALA Midwinter meeting this past weekend.  On Friday night, the 2014 USBBY Outstanding International Book award list was announced with books ranging from young children to young adult that were first published in a country outside of the U.S.  That list is here for your reading pleasure. OIB provides a great opportunity for you to promote international literature and USBBY in your state.  Bookmarks and other information can soon be accessed on the USBBY website.

The major ALA media awards were announced on Monday morning.  A number of these books have significance because of their global connections.  In particular, note the following books:

Marcus Zusak from Australia was given the Margaret A. Edwards Award for lifetime achievement in writing for young adults.   He is most well-known for The Book Thief and I Am the Messenger.

Rose Under Fire by Elizabeth Wein got a Schneider Award and is set during WWII in the concentration camp where horrific operations were done on young women as medical experimentation.

Mandela by Kadir Nelson is a picture book on the life of Nelson Mandela and received an Honor for Illustration in theCoretta Scott King Awards.

The Nazi Hunters:  How a Team  of Spies and Survivors Captured the World's Most Notorious Nazi by Neal Bascomb received the YALSA Nonfiction Award.

Several of the Pura Belpre awards have global connections, especially for the Illustrator awards. Maria Had a Little Llama by Angela Dominquez has a Peruvian setting for this well-known nursery rhyme. Nino Wrestles the World by Yuyi Morales is based in Mexican lucha libre traditions and Pancho Rabbit and the Coyote is written and illustrated by Duncan Tonatiuh from Mexico City.  Margarita Engle's Lightning Dreamer:  Cuba's Greatest Abolitionist received an Honor for text.

The Caldecott honor books include Journey by Aaron Becker, a wordless fantasy of imaginary adventures that incorporates nods to global connections across Europe and Japan.  Mr. Wuffles by David Wiesner has an "other" world connection through the alien spaceship that lands in the kitchen and becomes the cat's toy.  What will be of interest is that Wiesner created languages for the aliens and the insects, both spoken and written, as well as visual pictographs to record their travails with the dangerous cat.  Kathy Short served on this committee.

Two USBBY members, Doris Gebel and Linda Pavonetti, served on the Batchelder Award Committee, given to publishers for books first published in another country and language and then translated to English in the U.S.  The Batchelder Awards include The Bathing Costume, My Father's Arms are a Boat, and The War Within These Walls as Honor Books, and Mister Orange as the award winner.  Linda Pavonetti has written a short message about her impressions of these books and the award.
The ALA press release with all the awards.
I know I was sort of blown away by all those international connections! So, if  you want to stay in the loop surrounding international literature for children and teens, sign up and I'll be happy to share.