I have had a number of conversations recently about blogs. All surrounding ongoing viability, something which has already been broached by many smart people (NY Observer, Wired). Is amateur journalism too time-consuming to be viable? I spend a good amount of professional energy writing for (and even more energy trying to coerce other people to write for) the AASL blog, and know it isn't the kind of thing people are likely to take on without branding themselves, or some sort of renumeration.


Turning it over in my mind, it seems these his "no one reads blogs anymore" thing is predicated on some lazy assumptions:


I know not very many people read this, which is fine with me. It is my professional journal more than anything else, and who wants a lot of people poking around there? But it does make me wonder, is it all for naught?
Posted by Wendy at 7:20 AM 1 comments

Giving thanks for readers and reading

Last year, I posted some thoughts about libraries that had come up over the holidays. Though I spend so much of my time surrounded by books and reading, I always enjoy some covert and slapdash ethnography amongst middle Americans who are not quite as obsessed with those topics as I happen to be.

This year, there were lots of things surrounding ebooks, particularly given the $79 nook which brought many relatives out to Barnes & Noble early Black Friday. The local library "doesn't have its ebooks ready yet," said one cousin, but she is aware of the Nook's compatibility with "the library" and personally owns both eink and color Nooks. She travels with both, to read inside and out. Interestingly, she said she did not plan to renew her B&N "membership," since the associated discounts don't apply to ebooks.

Another avid reader asked me what I thought about "ibooks," which I took to mean any electronic reader. She is incredibly clued in to print -- mentioned the new Peter Ackroyd, Under London -- but resistant to e. I told her I had a variety of hardware, but still read 80% of my stuff on paper.

I spoke at length with two nieces, 6th and 9th graders, about the libraries in their suburban public schools. They seemed to be really keying on a few things:
I know no one working in their school system, but their version of policies smack of some arbitrary, not very literacy- or student-centered educational mandates. The very sort of thinking has been countered with yesterday's very exciting announcement from the AASL Board approving the Intellectual Freedom Committee statement about the "chilling effect" of labeling books. I have heard from some elementary librarians that their entire collections were arranged by AR Level, which I can imagine would make it neigh on useless for developing any real love of reading. I feel lucky to have gone to school before the fad for reading "on level." See Venn Librarian for more on that.


The most interesting conversation regarding librarians was an image-related one. A sister of an in-law had died suddenly, and she was described as a librarian and a lesbian. My husband mentioned that the rate of homosexuality was perhaps higher in the profession, which caused some really interesting comments. Relatives speculated it was because librarians tended to be "neat," "quiet," or "lost in books." I said perhaps it was because librarianship attracted tolerant, progressive people. This seemed to be news to them. Again, our perception of (or knowledge about) ourselves diverges from that of the public.
Posted by Wendy at 5:45 PM 0 comments

I'm just back from the Assembly on Literature for Adolescents workshop (ALAN), held after the National Council of Teachers of English (NCTE) conference. It's an interesting setup. Tables (accomodating 500 this year) are arranged length-wise in one large room, with speakers on a dias and a real minimum of multimedia distraction. I enjoyed having the time to relax and reflect among other readers.


Chicago is always fun, and this trip was no exception. I saw Murder for Two, a two-man murder-mystery spoof, at the Chicago Shakespeare Theater on Navy Pier. On Saturday, I visited Frank Lloyd Wright's home (as well as other structures he designed in Oak Park) with a friend and her adorable first grader, who is reading Harry Potter. Then Sunday I went to the Palmer House Hilton, co-headquarters hotel, where I was disgorged into a crowd of school teachers. As I have observed before, NCTE seems even more female than AASL.


The ALAN workshop was all day Monday and Tuesday. ALAN is a strange event. There is a compulsive energy in the room, almost an obsession with YA lit that I only catch a whiff of at YALSA events. It is an interesting mix of English teachers, librarians, university professors, and authors. There were tales of larceny (people stealing signed copies) and collapse, as Laurie Halse Anderson passed out, but went on to deliver her speech from a prone position just before being taken off to the hospital. How incredible!


ALAN has an award, named for writer Amelia Elizabeth Walden, for books that should "possess a positive approach to life, widespread teen appeal, and literary merit." Francisco Stork won for The Last Summer of the Death Warriors this year, the third time it was awarded. There was also a new award for best paper in the ALAN Journal.


One of the real highlights came in the half-dozen breakout sessions are held for an hour during one time slot each day. Even the most illustrious authors will still not have so many teachers crowded in at breakouts, and you are able to interact with most of them. I went to a particularly good on on Chicago as a setting Monday, and on Tuesday I asked Heather Brewer to inscribe a Vlad Todd book for a student, and she was terribly sweet about it. In contrast, the signings held in the ballroom are famously "silent," and I saw a woman ejected for using packing tape too loudly.


Even with the ensuing relentless queueing for signatures, hearing from the authors in quick succession was rather thrilling. I didn't take a laptop with me, but got by with my iPad and iPhone. I paid $18 for Internet access for one day, and used cell data the rest of the time, quite distracted with the contents of my cardboard box of books. I was thrilled with some I hadn't read (Lola and the Boy Next Door, Every You, Every Me) and some I had (Bitter Melon, Revolution), I was also jealous (of the boxes with Divergent and The Lover's Dictionary, both of which I read but would have liked for school). I began reading Jay Asher and Carolyn Mackler's The Future of Us at lunch Tuesday, and I finished it on the flight home.


Next year, both NCTE and ALAN are in Las Vegas. I have marked my calendar.
Posted by Wendy at 12:11 AM 0 comments 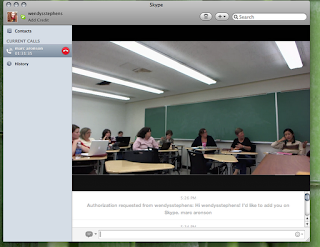 I skyped in to Marc Aronson's class at Rutgers Wednesday night while he was away at the National Book Awards. David Rothrock from Follett was there to pinch-hit for Marc, and I talked a little bit about my experience with ebooks and ereaders in a school setting.

I was a little jealous all the students there had the luxury of thinking deeply about digital resources. I know that expertise will come in handy immediately, since this seems to be the flashpoint of the day. And it actually made me think of the Digital Libraries class I took in 2000 with Professor Malinconico, where I did a final presentation on Project Gutenberg, which I love more deeply now than ever and now use almost daily.  It was tremendously heartening to see all these young professionals asking really intelligent questions about a very murky and confusing topic.

One student asked specifically about current awareness mechanisms. I promised to send this list of blogs, events, and review sites:


Digital Shift http://www.thedigitalshift.com/, especially content by Josh Hadro there and in Library Journal


LJ eBook Summit http://www.thedigitalshift.com/events/e-book-summit/ (virtual)
Thinking about it now, I would have added some more general interest library blogs, like Bobbi Newman's Librarian by Day and Sarah Houghton-Jan's Librarian in Black, which almost necessarily bump into ebook issues these days. I find I tend to get "too narrow" in my thinking in the first iteration these days. But I love the idea of helping young librarians cultivate their own professional learning ecosystems.
Posted by Wendy at 6:00 PM 0 comments