Why I am an iPad hater

Last June, I ordered an iPad, the 3G version. I have MacBook Pro, and I already knew I didn’t like the Apple computers, but I had nothing but positives to say about the iPhone, and this looked like a larger version of that device. Most of all, I was ridiculously excited about the tiered data options, since there were many months where I didn’t use my AT&T aircard at all.
Frankly, there wasn’t much use for the iPad because of the iPhone. I used it a few times: from a meeting to make a lunch reservation for a group from my school at P.F. Chang’s, because I couldn’t do it via my phone because of the interface. Another time, I used it to navigate to a bookstore in Decatur, Georgia (which I really could have done with my phone, anyway, but maps do look nicer on the iPad). When I did use it, I picked it up (like my phone) more than once to take a picture, but this was the first generation, so it actually had LESS functionality than that device.
I did read one iBook, because it wasn’t available in Kindle format, but I frankly found the thing too heavy and rounded to work as a reader. Anyway, to say I hadn’t used it much is a huge understatement. But it was at Educon in January that I got my first SIM card error. I had left my laptop at home for the conference, and everyone else seemed to be wielding iPads, and there was accessible wireless at the Science Leadership Academy, but I couldn’t use it in my hotel room, so I was limited to the phone there.
I read up on the SIM error, as one does, and used a pin to pop out the SIM card and blow on it (exactly what my “genius” did when I did take it to the Apple Store, but I had barely used the thing, so odds were it wasn’t dirty). They restored it to factory settings, but it errored again after an update. I was getting ready to go to Computers in Libraries to talk about ebooks and wanted samples of hardware when I remembered the error and went back to the store.
That “genius” (a nice girl, an art major, a painter) almost conceded getting data was a lost cause when she finally resorted to wiping the thing and restoring it to its factory settings, which seemed to work. I had told her I had done the updates the day before, so I had backed it up then, not like there was much data but I would be able to get the applications back, I assumed.  I restored the data and synched to iTunes the day before I left for the conference and, last I checked, the SIM card was detecting a 3G signal. Then I got to the airport. The SIM was gone again.
The most ridiculous part of the whole thing is that you can’t discontinue the $15 a month AT&T data plan without the SIM card being active. So I keep being billed for data I can’t deactivate. It seems like a paltry amount of money, compared to the $60 for the aircard, and the device is no superfluous to my needs, I really just tend to forget about until it is time to pack for a trip, and then I start imagining how much weight I could save if I could do without a laptop, and I pull out the iPad, and it fails.
I am at the end of my tether and want a refund for both the $649 device and the $15 a month I have been hamstrung into paying to AT&T because of their ridiculously defective product. I will eat the $100 for the Zaggmate bluetooth keyboard case that fails to properly hold the thing in any secure fashion – I have resorted to double-sided tape to attach it, but did allow me to type without looking like I was imagining I was conducting the London Philharmonic. And the Zaggmate made the device more useful for content PRODUCTION. I can consume all the media I want via my phone. I have real misgivings about buying these things for educational use if you can't write on them in a sustained way.
Now, another trip to the Apple store looms on the horizon. I consider it a particular kind of hell, the one near me is filled with people I don’t particularly want to be near, scrawny braying electrical engineers in filthy running shoes. The “geniuses” treat everyone like they are mentally deficient. There are only two Apple stores in the state of Alabama, and one is in my city. What if I lived hours away? Can they really expect people to make that trip?
Obviously, I should have just gone with a Verizon mifi for my mobile data needs.
Posted by Wendy at 8:38 AM 0 comments

I spent last Wednesday and Thursday in Orange Beach, Alabama, at the Alabama Library Association Annual Conference. Alabama has a tiny shoreline, but it IS rather gorgeous and unspoiled by development -- I was actually rather distressed that they put the beach on our latest license plate. I guess don't want to share it. The conference opened on the anniversary of the BP Deepwater Horizon disaster, but the beaches were pristine. 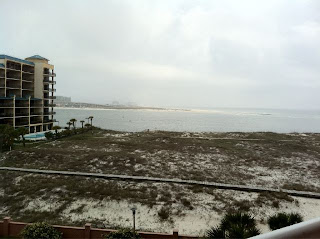 Mystery writer Carolyn Haines opened the conference, touching on everything from the 99 cent ebook price point to her covert check-out of the once-scandalous Forever Amber from her childhood public library. Some other highlights:

Jane Daugherty from the Gulf Shores public library talked about helping patrons with workshops and one-on-one in using the Overdrive ebooks available from their eresources consortium, Camellia Net. Very interesting to hear about a tech-y topic from someone working across a digital divide unrelated to income, given their influx of snowbirds.

The CUS Research Forum featured three presentations of award-winning research, including one practitioner study about improved collections in a middle school library and increased circulation among underprivileged students. Elizabeth Hester, who worked on her National Boards certification at the same time I did, is the librarian and Melissa Sherman her collaborating reading specialist at Irondale Middle School where they compared circulation statistics by low SES after an infusion of Title I money for materials. They also recommended ordering multiple copies of popular titles and improving subject-related signage, including anticipatory signage about popular sequels. 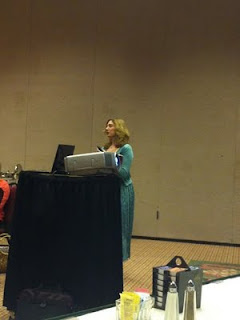 The CUS/YASRT breakfast is always one of my favorite events, and we were lucky enough to have Irene Latham come to speak about the process of writing and the reception of her terrific debut novel, Leaving Gee's Bend. Our Teachers as Readers book group had skyped with Irene in the fall, but getting to meet her and thank her face-to-face was very special. There were also some very provocative booktalks from librarians around the state which I will be using for collection development.

I attended David Brown from the First Regional Library System in Mississippi's presentation on reader's advisory for graphic novels, which took an interesting approach -- pitching graphic novels to the readers of traditional formats, especially when it involves graphic format versions of their favorite books or informational topics of interest. Brown really stressed that additional cataloging was required if these items were to be discoverable via the catalog.

My co-librarian Carolyn Starkey and I presented on ebooks, and the crowd was incredible. We had some women from a small public library come up afterwards to talk about their few requests for the format from patrons and discussed ways they could satisfy their patron's desire to read in that format without heavy investment by connecting them with free sources, which was one of the best conversations of the conference.

ALLA is always fun because of getting to catch up with friends I don't see anywhere else, and it was really on-point this year. Next year's conference will be in Birmingham, April 24-27. I have marked my calendar.
Posted by Wendy at 12:19 PM 0 comments

Thirty years ago, I woke up in the middle of the night so I wouldn't miss a minute of the Prince Charles-Lady Diana Spencer wedding.


It was all anyone was talking about -- real "social media." The press coverage of the event and the young marriage might have actually be connected to the glossy magazine obsession I had through all of the eighties. Am I the only girls forever scared to be photographed in a skirt after this?


And then there were the paper dolls...


It was only after I had booked spring break tickets to London -- to catch a few shows in the West End (Keira Knightly in The Children's Hour and Allison Steadman in Blythe Spirit) and visit with friends, too -- that I realized I will be only be missing the upcoming royal nuptials by about a week.

Fingers crossed there's some terrific Will and Kate commemorative paraphernalia in the markets. I think these bode well, but on a related note, I wish I had never discovered Tom Tierney paperdolls on Amazon...

Is you library a department store or boutique?

In D. E. Stevenson's Sarah Morris Remembers, the heroine goes from a curate's daughter turning hay in the fields to a silk-clad sophisticate, and it's all down to the opportunities she encounters in a department store. While by night, Sarah endures the blitz, with bombed-out families sharing her shelter, by day, commerce goes on with no hint of austerity:


"It was a 'luxury store,' warm and comfortable; even in wartime, Barrington's had a wonderful display of goods. On the ground floor, there were wide, carpeted corridors with stalls on each side on which were displayed perfumery and soap, ribbons and laces..."

I happen to love "shopping" books, and I do think there is something here for libraries to take away. A library is not a bookstore, but could be more like a department store. Culture shouldn't be about base consumption. Contrast the delight Sarah feels in her store (and those in Betty Cavana's Connie Blair series, whose stilted prose did not obscure the prospect of retail nirvana) with the retail models which began to emerge over the past decades. We have super-stark, J. Crew and Gap-y minimalism on one hand and hand-curated collections on the other. Consider Scruples, Judith Krantz's torrid book about high-end boutiques. It wasn't enough to be a successful merchant, Billy Ikehorn had to be an arbiter of style.

I prefer the model of expansive department store to either the boutique or bares-bones options. Anyone who has played around with the library digital music solution freegal must bemoan its lack of discovery features. It is more like locating a known item through a torrent site than the exploratory iTunes experience.
I think, as with Barrington's in Stevenson's novel, we must inject whimsy and delight into library-going. But it might be hard to figure out how to do this when even the remaining American department stores like Macy's and Nordstrom seem to display so many similar items, promoting quantity instead of privileging real variety and service. I found it difficult to find a person to ring up my Anna Sui tights at the Nordstrom on Michigan Avenue in October.

While I do love the notion of personalized services like print-on-demand, e-reader assistance, and patron-driven acquisitions, I worry that when attempting to be responsive to users, we will end up reflecting the requests of the few who are relatively enfranchised. The boutique model does not welcome everyone and will be off-putting to many. If they won't know our code, we need to give them a range of discovery options and recommender systems, ones that are easy, intuitive, and as seductive as iTunes and Amazon. And I love the idea of of creating a dedicated girl's space, like those women's lounges in the better department stores....
Posted by Wendy at 3:24 PM 0 comments