From deep within the 11th Circuit 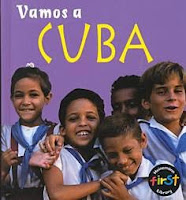 My Google News alert started popping up yesterday morning. The Supreme Court was not going to hear the ACLU's case surrounding the removal of Vamos a Cuba from Miami-area school libraries. I am no legal scholar, but that refusal leaves the ruling -- that individuals can call for the removal of material they personally deem factually inaccurate from school library collections -- standing in the 11th Circuit Court, which includes Alabama and Georgia as well as Florida.

I don't even want to get into the claims on the part of the self-described former political prisoner who lodged the complaint against a picture book. I went to Cuba in 2004 and have pictures of Cuban children laughing and smiling, much like those pictures on the cover. But that is a story for another day.

Until yesterday,  I had been confident in my laboratory for intellectual freedom, as Justice Brennan described it, feeling that Board of Education of Island Trees versus Pico had once and for all established that school boards should not bow to community pressure to remove "objectionable" materials from the shelves. So the high court allowing this decision to stand chills me to the marrow, for the same reason I have never wanted our library's catalog online for home access. I want to preserve our students' right to intellectual freedom, which means preserving their ability to a receive diversity of opinions. Meanwhile, in region where selection is often muddied with censorship, it will be interesting to see how this will be played out next. Will it be the books on non-Christian religions? From authors affiliated with left-wing political causes? Or will it merely offer a mechanism for blanket protest against those lists of books, the ones we hear are disseminated at some of the churches?

I got a phone call last spring.
"Do you have 'My Daddy Has a Roommate'?" said the caller, who did not bother to identify himself.
"No," I said, not bothering to correct him on the title or share that, as a high school library, our number of picture books is small and almost all curricular.
"Do you have the Bible?"
"Yes," I said.
"Good." he said, and hung up.

I don't know who preached about homosexual lifestyles seeping into the school via the library collection. But next time, it might be question about a book I hold, and if it comes at the behest of a community member, not a parent whose student has selected that book from our collection, I might have to begin to think about another sort of laboratory altogether.
Posted by Wendy at 7:17 AM