I've never lived in Washington, but have usually ended up there at least a couple of  times a year in my adult life. If you don't consider New Orleans as American city, Washington would be my favorite, one I prefer to New York and San Francisco because of its human scale, public transportation, and political and public service bent. So I thought I would share some my "musts" for the district for those who might be heading to ALA later this month...

Eating in DC Meskerem for Ethiopian makes it worthwhile to brave the throng of college kids in Adams Morgan. Two other of my favorites are Al Tiramisu (butternut squash ravioli!) and the perennially populat Pizza Paradiso in Dupont. For a casual meal, I love Teaism, which offers bento boxes and scrambled tofu is addition to a dazzling tea menu. The branch of Teaism by the Archives does an English-style high tea as well.  If you're lucky enough to be there on Sunday, you can catch the flea market next door, but any day of the week, the newly rebuilt Eastern Market is fun place to stop by for lunch. Lots of nice cafes nearby, too. I have never been disappointed by Firehook Bakery, which has locations in Cleveland Park as well as Dupont. For drinks, you can't beat the comprehensive beer lists at the Brickskeller in Dupont -- be warned, I've seen mice there more than once! -- and its offshoot, RFD (in Chinatown, near the Convention Center).

Shopping in DC I shop a lot less when I travel now, but I always make time to drop into Beadazzled, my favorite bead store anywhere. I love the Dupont location, but there are others in the Mid-Atlantic. The Dupont shop is just a stone throw from two great bookstores, Kramerbooks & Afterwards Cafe and a great place for used editions, some of them quite interesting, and prints, Second Story Books. 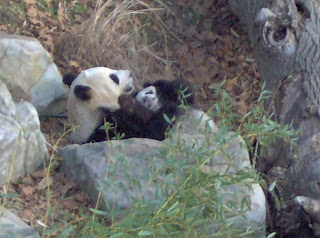 Sightseeing in DC I love being able to drop into a museum and not feel you have to spend the day because of a $20 investment in admission (or worse, that compulsory recommended donation). So, the free museums  and National Zoo -- with pandas Mei Zhang and Tian Tian, two of the eleven pandas stateside, their cub Tai Shan (pictured) having recently been sent back to China -- really makes D.C. a treat. The National Gallery of Art is my favorite art museum, and I always check the event calender at the Library of Congress, which has some nice film and concert series in interesting areas of the library after hours. The hour-long highlights tour at the Library of Congress is a must if you haven't done it.  If you are going to pay for a museum, the Newseum would be my vote for the best, and the Spy Museum, which has tremendous promise as a concept, is disappointing.

Two of my favorite places to see movies in DC are the Uptown single at the Cleveland Park Metro stop and the incomparable AFI Silver in Silver Spring, the closest thing to a contemporary film palace I've seen.

Now, if I can just manage to sneak away from the Convention Center...
Posted by Wendy at 5:28 PM