Everybody's up in arms I didn't watch Oprah yesterday, but I felt the blowback from the twittersphere: 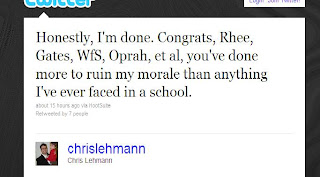 I saw the trailer for Waiting for Superman last weekend and wretched involuntarily. I am disappointed Oprah would be manipulated by that dreck. Anyone who has seen illiterate relatives attempting to sign the paperwork for their child or grandchild to drop out on their sixteenth birthday can foresee the end result of charter schools, schools without standards like the "segregation academies" run out of people's living rooms a few decades ago. As long as our culture refuses to esteem or fund education, public schools with governmental accountability will be the only way to teach the masses.

What I'm outraged about: fewer than half of those polled by CNN oppose gay marriage. Yet the family and consumer science teacher at my school gets called in for suggesting that gay marriage doesn't affect those outside the relationship. I suppose the Nontraditional Families unit in her Family Dynamics course of studies should be limited to blended families, to allow the church-going, only-sex-within-marriage, who-cares-how-many-marriages to salve their consciences? Meanwhile, I have a student who lives with her two mothers. Evidently she (and her teacher) should allow another student to indict her home and family, because it isn't conventional and, as the protesting student kept insisting, violates her religion. So now I'm stuck babysitting that conscientious objector because, as well all know, any student with problems with the curriculum should be redirected TO THE LIBRARY.
Posted by Wendy at 7:17 AM