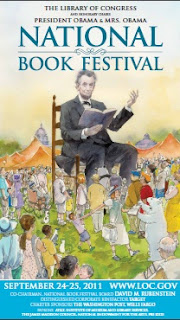 I can't stop talking about the National Book Festival. It had been on my radar since I arrived in D.C. on October 9, 2004 -- just after that year's event -- to visit the new National Museum of the American Indian. Little had I known, I would had left home a day earlier. This year, I finally got to go...

I arrived about an hour before the speakers began, which put me in a prime viewing location for Toni Morrison. Toni Morrison, who wrote Song of Solomon (which I read for class in high school), Sula (which I read for class in college) and Beloved (which I wrote a paper about for my English M.A.). Our Nobel-prize-winning American woman author. And since I scored an awesome seat in the second row, I felt like she was making eye contact with me the entire time, as she talked about:

Next, I did beat a path to the Teen tent next, to hear Sarah Dessen (and hear the questions from her many adoring fans. To the college girl who announced herself  "on the upper end of [Sarah's] readership" -- I don't think you are anywhere towards the limit of that bell curve. But the real *shocker* for me was the fact that Sarah used to work for Lee Smith. Lee was also Susan Gregg Gilmore's seventh grade English teacher... what an amazing literary legacy there.
I was able to stay just long enough to hear Katherine Paterson. Jacob Have I Loved (which I read in middle school) is one of the most powerful books I keep coming back to again and again, and hearing Paterson speak about the primal sibling relationship (as well as showcase her new book, The Flint Heart, with illustrations by John Rocco, who did the covers for the Percy Jackson series) was terrific. Their emphasis on books as gorgeous objects was especially dear to my heart (and gorgeous The Flint Heart is, as it was published by Candlewick).
I had met (and gushed) to Sarah and Katherine before, but I certainly hadn't attended a book festival on this scale. I really do recommend it if you ever have the opportunity to go. Being surrounded by tens of thousands of people who all love books is quite heartening.
Posted by Wendy at 12:31 PM