I was really on the fence about whether I would even be able to go to the ALA Midwinter Meeting. I have always enjoyed Midwinter more than Annual, but I haven't been up-to-par since Christmas and wasn't sure I would be able to take the physical demands of conferencing, especially since I am on Council now.

I'm SO very glad I decided to push through it and come to Dallas. Council was fascinating. Thanks to you all who voted for me as Councilor-at-Large last spring. I especially loved the conversation about the nuances of language in the resolution about publisher's discriminatory policies on sales and pricing of econtent for libraries. Some felt it was caustic, while others argued that we should not name specific vendors or publishers because we need long-term positive partnerships with them. I, having worked for a vendor, was not worried about strident language there.

I took it really easy in Dallas. I took naps, only really went out to dinner two evenings, both of them really early, but was still able to catch up with many friends and colleagues. And it was definitely the best Youth Media Awards for me in terms of having read the winners -- I'd read both the Newbery (Dead End in Norvelt) and Printz (Where Things Come Back), and about half of the Alex list too -- Ready Player One, Salvage the Bones, The Scrapbook of Frankie Pratt, The Lover's Dictionary, and another couple I liked less. And I am really excited about hearing Gantos' acceptance speech; a fan since Hole in my Life, I've heard him at ALAN and found him personally both intriguing and hysterical -- a real life Joey Pigza.

In the most magical moment of the meeting, I was dashing from the awards announcements to Youth Council Caucus when I passed a beaming John Corey Whaley walking down the conference center concourse clutching that morning's Cognotes. I asked if I could take his picture, and he very sweetly suggested I get in the frame, too.  I had come upon 28-year-old Whaley's debut novel through word-of-mouth at ALAN, and I was glad to see it was more than my own regional prejudice in appreciating its incredible charm and winsome voice. To take both the Morris and the Printz is an incredible accomplishment, and I am thrilled for him. 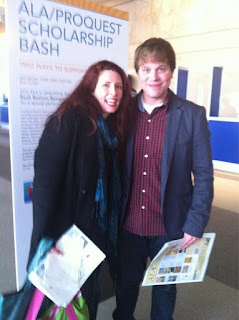 Exhibits were, again, a wash. I got some ARCs, few enough to pack in a single checked tote, but nothing I was really longing for (Timepiece by Myra McEntire, I Hunt Killers by Barry Lyga), but I think some of the issue were the exhibits-only pass-holders who camped out in line for hot ARCs like Kristin Cashore's Bitterblue. There was some vitriol online about this from librarians, and I was happy when some publishing people I spoke with agreed it was problematic. But the publisher previews have given me all sorts of titles to anticipate this spring, and I really enjoyed attending the RUSA Awards which gave me some grown-up titles to add to my list as well.
Posted by Wendy at 7:43 AM