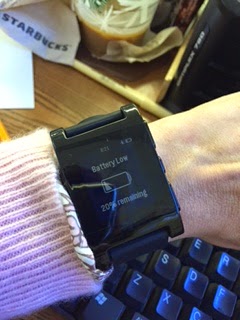 Several people have asked me if I'm going to buy the Apple watch. But I feel like I am charging this eink one all the time, and the battery predictions of the Apple are pretty dire at a quarter to a fifth the life per charge of my Pebble. It almost makes me want one of those Rolexes that winds itself from your wrist motions.
Posted by Wendy at 5:00 PM