Part of my favorite part of professional service is getting a sneak peek of which books will be honored by association awards. In December, the Alabama Library Association approved its author awards in four categories: Adult fiction, nonfiction, teen and children's books. I spent part of a January afternoon reading the youth winners. 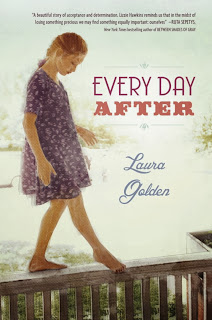 Every Day After by Laura Golden (2013)
2014 Alabama Author Awards Winner -- Children's
I heard Golden speak about her debut at the Southern Festival of Books, but didn't seek it out -- I think I was a little turned off my the Mirette-esque cover art. But, actually, the narrator is going into sixth grade, considerably older than the image suggests. And it's quite a read. Golden uses evocative language to bring us into the world of Lizzie Hawkins, a place replete with rough-hewn overalls and lye soap, with layers of clay caking her too-small red shoes. The plot centers around missed mortgage payments, an absent father and a mother that might as well be. Lizzie takes in mending, opens her home to boarders, does every little thing to keep the wolf from the door, The scene where Lizzie sells her heirloom locket is not for the jaded. It's Golden's well-considered sensory details which make Lizzie's story Bittersweet (like Lizzie's small town), instead of just bitter. Her language evokes some of our best Southern storytellers. 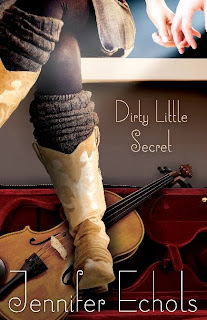 Dirty Little Secret by Jennifer Echols
2014 Alabama Author Awards Winner -- Teen
What is your years of playing bluegrass with your sister for years at music festivals had become a dirty little secret, as she sheds her past to prepare for her recording label debut?  It's the summer between high school and college, and Bailey is supposed to be laying low while her sister's album is being promoted. When she finds some simpatico bandmates -- including  a hunky former football player, a Buddy Holly-lookalike who's also headed to Vanderbilt -- who appreciate her fiddle-playing, it might be time for her to rethinking abandoning her musical dreams. This one is "new adult" in that it a little sexy, but these kids are playing gigs at bars on Broadway, so perhaps it's not surprising. The Nashville geography and landmarks are well-done, too. It actually reminded me of one of my favorite books of all time, Them That Glitter and Them That Don't, by Bette Greene.
Posted by Wendy at 5:00 PM