ALA Midwinter, in retrospect

I'm back from ALA Midwinter in Boston, and you've probably heard the biggest AASL news: the association formally adopts "school librarian" as the position designation in organization parlance. No, that doesn't affect your degree, or probably even your job title. Some colleagues feel it's a step backwards, I personally think it describes both my ALA-accredited library school education and function in the building more precisely, making it preferable. In the next biggest news, YALSA's BBYA becomes...BFYA? Or some variation thereof? Isn't it hard enough for nonfiction writers? Interesting thoughts on that here.

Friday, I attended the YALSA Web 3.0 preconference, which included my own presentation with fellow school librarians Laura Pearle and Buffy Hamilton, which was generally well-received. That morning, state librarian and futurist Stacy Aldrich sounded like the Californian she is, a few librarians from Vermont and New Hampshire were there to stridently attest to the lack of infrastructure for cell phones and broadband that Aldrich presented as ubiquitous. 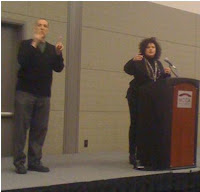 There was a lot of twitter going on, including the now-infamous Youth Media Awards leak. (Rebecca Stead's When You Reach Me had swept so many of the mock Newbery predictions, it wasn't the shocker it might have been.) Deborah Sloan and Mitali Perkins hosted an amazing tweetup. Seeing the warm, wonderful Adriana Trigiani (right), whose Very Valentine won a RUSA genre award, was a personal high point. (BTW, I thought it was very cool that Harper Collins had ASL translators at their events.)

Sarah Kelly John's campaign for ALA president provide a rallying point for school librarians, our allies in youth services, and progressive librarians of a variety of stripes. The networking uncommons (a better-appointed version of the blogger's cafe at AASL in Charlotte) gathered some momentum Sunday. I felt the age issue was huge all conference, and really tried to welcome younger librarians braving the organizational meetings.
Posted by Wendy at 4:36 PM