For a long time, e-readers struck me as a sort of single-function electronics, something akin to a $5 handheld electronic football game.

But when I saw Amazon's Kindle iPhone application, an impulse for instant gratification coupled with a desire to make use of the hardware I already owned compelled me to browse theie e-book selection. The immediacy of getting the book delivered as soon a I press a button is every agoraphobes' fantasy. It was a text equivalent of Audible , another service I loved initially, but grew to resent for its licensing strictures, and as exciting as the Project Gutenberg , if much more expensive.

My first Kindle purchases were two novels, Maeve Binchy and Sarah Dessen, maybe the worst possible choices for electronic book reading. Those are books you want to take into the bathtub, so I didn't get beyond about page forty of either in this format, eventually finishing them both in print. Content-wise, I felt the Kindle format came into its own for me with more informational text. I turned to the format for a piece of dense nonfiction, London, the biography by Peter Ackroyd. The book was too big to carry comfortably and would invite too many conversations if I took it out anyway. I began to notice the shortcomings of the format for scholarship then because of absence of pagination and indexing, but expediency trumped my misgivings and I did buy another Kindle title for my iPhone, Barbara Bradley Hagarty's Fingerprints of God . I began the book, about the neuroscience of religion, at six one morning and was literally too impatient to wait for a bookstore to open for me to hunt for a print copy.


The worst part of the Kindle is what happens to the book when you are done reading it. You are purchasing a license, rather than an object. You can't pass it on to a friend, trade it is at the used bookstore, or donate it to your library. I wrote about my lukewarm feelings on the concept for the AASL blog. So after spending a week raving about Fingerprints of God to anyone who would listen and then not being able to share it, I really didn't think about e-books for several months, but when I was going to Europe this October, I decided it was the perfect opportunity to test the newest wafer-thin generation of Kindle hardware. I rationalized that, given Amazon's returns policy on the thing, I could always send it back after the trip if I was displeased. It was a wonderful way to minimize my luggage.


I had some of the same issues with the "real" Kindle as with the iPhone app. For example, I immediately regretted downloading After by Amy Efaw . Normally, that would exactly the type of book I would order in hardback from Amazon and put in the collection at my school library after I finished it. Both versions cost $10. But with the Kindle license, you essentially pay a per-reader fee. Divide that by the number of total readers for a print book. So, for bookworms, it can be an expensive habit. My wonderful public library does provide access to Overdrive e-books, but they aren't Kindle compatible, and I don't want to read on a laptop. I would gladly pay the $1 or so to convert the .pdfs to Kindle to have access for the two-week loan period, but even then another limitation has to do with the format. Not that many books I really want to read are available as e-book. Once, I attempted to compute a ratio, and something like 85% of books I read over three months weren't. The Kindle might offer plenty of titles if you enjoy current New York Times bestsellers, but with publishers threatening to embargo , I'm no so sure that is even the case. 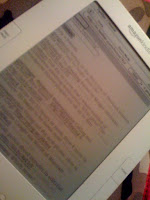 Nonetheless, there are some aspects of this weird, white, stand-alone device that I adore. One seldom talked-about aspect of the Kindle I'm particularly into is a so-called "experimental" that feature gives you rudimentary internet access. It gives you access to T-Mobile's data network without any sort of fee. That alone seems to justify the device. And I did find the Kindle store's samples were particularly wonderful for locating books on the fly, remembering titles, and reading that all-important first chapter. It's a 21st century version of Books-in-Print, whether I ended up buying it in an electronic format or not.

My ambiguous feelings about the Kindle became moot one day when I was in the middle of an A.S. Byatt book. When I turned it on, the display was smudged, a smear of e-ink rendering one-quarter of the screen unreadable. Thankfully, I had only had the device three weeks and was within the 30-day money-back period, so I printed out the return label. "Another broken Kindle?" the woman at the UPS Store asked. I asked for a refund instead of an exchange. 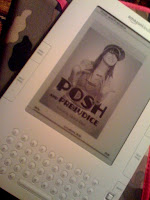 I had pretty much resigned myself to living Kindle-less, finally finishing the Maeve Binchy on the iPhone app, when my husband gave me another, with a rigid protective case, for Christmas. I downloaded and giggled through Grace Dent's Posh and Prejudice.


I am not sure if I am going to keep the second Kindle, but if so, I will definitely get the $70 year extended warranty. And I will be altogether prepared to buy another piece of hardware the moment those two years are up. Kindle and subsequent e-readers will do to books what digital audio files, making it entirely too easy to lose an intellectual product altogether in the digital ether.