Ambiant Findability: Foursquare & When You Reach Me

Is it YA? It's on BBYA's top ten for 2010. Is it middle grade? It won the Newbery. It obviously has a wide reader base, but the L'Engle homage that is Rebecca Stead's When You Reach Me sure isn't contemporary.

Miranda is like the younger sister of one of Norma Klein's spunky and streetwise New York City teens of the 1970s. Though I bet few librarians see this as historical, the era it depicts is very much a thing of the past. As a sixth grader, Miranda -- her name itself so wonderfully, wildly evocative -- is afforded off-campus lunch privileges and even turns those 45 minutes to her own advantage working for Jimmy, without child labor concerns. As a "latchkey kid" she roams the streets -- which are portrayed as slightly harrowing -- without the cell phone lojack that keeps tabs on kids today. I have been thinking about Miranda's comings-and-goings as I have played with the location-based technology, Foursquare. How checking in could have checked those conundrums of time and space! 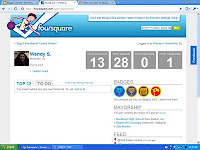 I downloaded Foursquare after reading how it might be "the next twitter" on Mashable. When I began, my town was utterly unmapped, but I played in Philadelphia in November and December and Boston for ALA Midwinter. After a while, I noticed a venue or two in my area, proof of its expansion into the provinces. I added my own spot -- a cemetery a stone's throw from my house -- and began checking in and accruing badges. I checked in at Starbucks, and the local grocery, both established if sloppily described. I became mayor of place after place. I added my hair salon, and the occasional place to eat. I began to realize I was documenting my own poor behavior. I often go to dinner too late & remembered the story about FB and insurance. If eating late was unhealthy, in our nanny state, did I need to produce my own evidence?.

I have read about interactions between Foursquare and newspapers, and heard someone pondering in Foursquare could improve attendance, and thought about the clickers that students at the University of Michigan were buying in 2006 to clock themselves in at large lectures. Of course, one individual could manipulate several handsets, cheating the notion of the technologically-enforced attendance system. 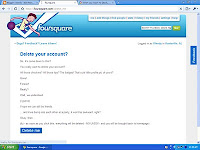 When I worked for a library automation company, we actually have a similar directive to check-in to the network when we got into the building. We could do it via the command prompt (other commands produced a list of the checked-in or displayed everyone's current in-or-out status) and there were graphical "in" and "out" buttons on our thin clients. If you looked at the reports, it became pretty obvious that anyone with any sense wasn't using this system of stating their whereabouts. The more intelligent and experienced ignored it for months or years at a time. I deleted my Foursquare profile and am seriously, with the advent of iPad-linked tiered data, thinking about moving to some sort of anonymized phone (versus the infernal device that is the iPhone). I am ready for the privacy revolution. I am tired of snitching on myself.